A Potential $14 Billion Up for Grabs

As investors, the hardest thing to do is have the courage to bet against the crowd…

Especially when the hype-squad is getting the greed glands pumping FOMO for whatever the new “hot” meme is – be it SPACs, NFTs, or whatever new fad is supposedly going to make you insta-rich.

But if you want to “beat the market,” it usually means being both contrarian – i.e. going against popular opinion – and right!

That’s why today, we’re going to take a look under the hood at the $434 billion per year “back pain epidemic” pretty much no one is talking about…

And how savvy investors can sneak in the “back door” of the growing Mega-Trend by considering a little-known sector expected to hit $14 billion by 2026.

A Brief History of Back Pain

Back pain isn’t a new phenomenon. In fact, the earliest recorded mention was written on a papyrus scroll dating back to 1,500 BC.

However, since the 1950’s, the Western world has experienced a marked and documented increase in low back disability.

According to The Lancet – one of the world’s oldest and best-known general medical journals:

Low back pain is now the leading cause of disability worldwide.

The European Spine Journal estimated that in 2015, over half a billion people worldwide had low back pain.

It also ranked low back and neck pain as the fourth leading cause of disability-adjusted life years (DALYs) globally – just after ischemic heart disease, cerebrovascular disease, and lower respiratory infection.

What is behind this global “back pain epidemic”?

According to the non-profit Nordic Orthopedic Federation concluded:

“Low back disability, in the sense that we mean it today, is a product of our industrial society.”

As counterintuitive as this might sound… the shift from an industrialized nation with practically non-existent labor laws to a “white collar” economy is perhaps to blame.

Many of us now get to sit in comfortable office chairs for hours a day… and plenty more hours hunched over staring at one of our many electronic devices.

Our spines have not evolved to survive the wear and tear of upright activities.

And even though we’ve had more than 70 years of progress since the end of World War II, the “back pain epidemic” is showing no signs of slowing down – and it’s costing American’s hundreds of billions of dollars each year.

Approximately $90 billion is spent on the diagnosis and management of low back pain, and an additional $10 to $20 billion is attributed to economic losses in productivity each year.

Others have found even more dire consequences…

Total losses from back pain could be as high as 2% of GDP for Western countries, mostly from lost productivity.

Even discounting productivity losses, the amount of direct healthcare spending itself is eye-opening.

According to a 2016 study of 154 medical conditions, low back and neck pain had the highest amount of healthcare spending – at $134.5 billion. 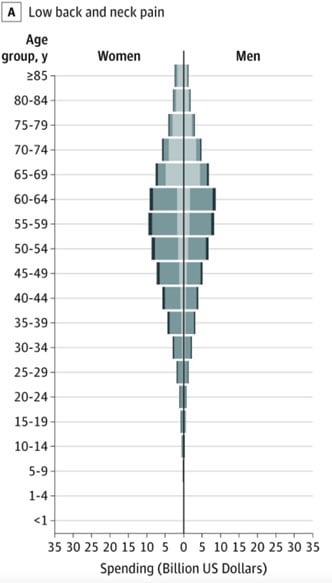 Hospital costs have been increasing, with one study finding a 177% increase in aggregate costs from 2004 to 2015 for spinal fusion surgeries. Average cost per admission? Over $50,000.

This is a big, expensive problem. And by all indications, it’s only going to get worse.

Studies have found that those over 50 have a 90% chance of some sort of spinal disc degeneration.

That’s why it’s no surprise to learn that spinal fusion surgery was the fifth most popular surgical procedure for the 65 to 79 age group.

Also unsurprisingly, people who go through surgery account for 30 times more costs than those who don’t.

This means the increase in spinal surgeries from this “demographic time bomb” will further strain our overburdened healthcare system.

The cherry on top? Our rising obesity rate.

Studies have consistently shown that being overweight or obese are risk factors for low back pain in both men and women. 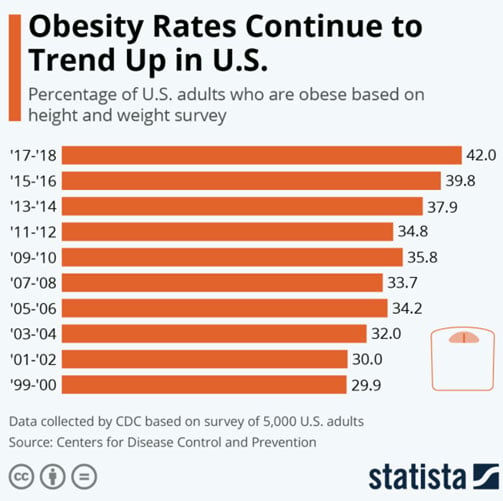 And with it, increased demand for spinal surgical technologies.

In the US alone, it’s estimated that surgeons perform 400,000 instrumented spinal fusions every single year!

And this growth is happening despite the painful consequences that occur with failed back surgeries.

And also highlights the opportunity for procedures that reduce the surgical suffering of “open” operations.

According to the CDC…

Add our rapidly aging populace to the mix, and we have a recipe for an almost inevitable increase in spinal surgeries.

The Courage to Be Contrarian

To bring us back full circle, the key to generating market beating returns is to be contrarian and right.

When it comes to investing in healthcare, I hear about futuristic solutions – like AI, robotics, and digital transformation – all the time.

But what I pretty much never hear about?

Simple technologies that lower costs, reduce risk, are easier to use, and have proven results!

A contrarian idea in the face of the dream of “high tech” medicine.

Investing in the future of healthcare in America

The challenges every investor must know about before saying yes to a deal.

The Little-Known “Rocket Fuel” for a $75 Billion Market

What’s driving the growth of this red-hot market (and how you can invest in the trend)?

For more than 70 years, this “undercover epidemic” has caused hundreds of millions of people to suffer from the leading cause of disability in the world…

The Little-Known “Rocket Fuel” for a $75 Billion Market

The Future of Telehealth is Being Decided Now