But here’s the reality about exits that most new investors don’t understand about Pre-IPO investing.

Most companies will never go public!

Statistically speaking, more than 90% of privately held companies that make an exit will do so by selling their company to another company (via a “Merger” or “Acquisition”). 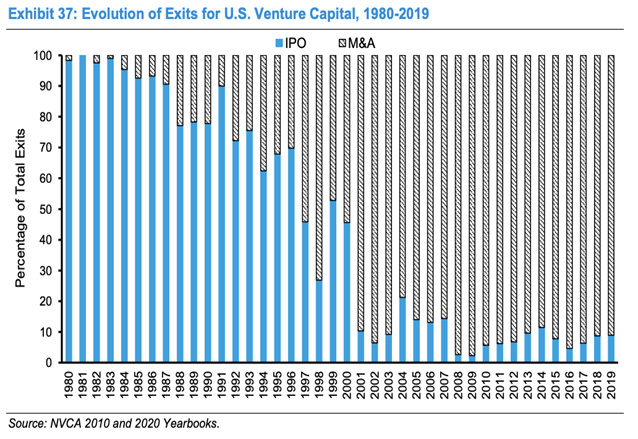 In the late 1990s through 2000, both IPOs and a sale of the business were popular. But since 2000, IPOs have declined substantially, and a sale, either to a strategic buyer or a buyout fund, has become the preferred vehicle for exit

That’s why today, we’re going to talk about an important scenario you might find yourself in as an investor…

“Acquire or Be Acquired”

In 2002, management consulting firm AT Kearney published their book “Winning the Merger Endgame: A Playbook for Profiting From Industry Consolidation”.

In it, they describe a useful framework that most investors never learn…

Here’s how their model works in practice…

Once an industry forms – or is deregulated – it will likely move through four stages of consolidation: Opening, Scale, Focus, and Balance & Alliance. 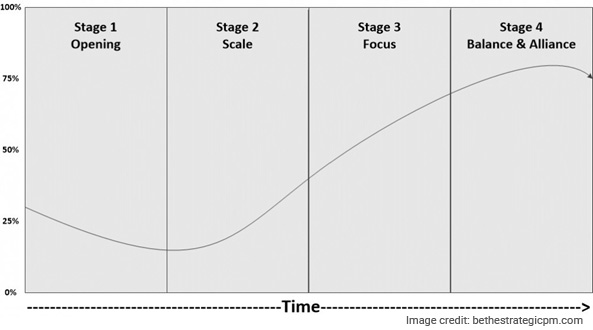 By appropriately identifying the stage, understanding the defining traits and behavior of our stage, we can better understand – and potentially predict – market behavior and trends.

According to the authors research – based on an in depth analysis of 1,345 large mergers by 945 acquiring companies – they came to some rather interesting conclusions…

Furthermore, “an industry will take on average 25 years to progress through all four stages; in the past it took somewhat longer, and in the future we expect it to be even quicker.”

Also according to the authors “in analyzing the consolidation strategies of 25,000 companies across industries, it became clear that – without exception – the Endgames curve accounted for all movement.”

This means in the land of unicorns, bulls, and bears… the laws of the jungle – ”eat or be eaten” – still applies.

Because eventually, the ecosystem will be dominated by a few (or one) “Apex Predators” who simply outlasted – and out acquired – everyone else.

Since the release of the authors book in 2002, we’ve seen a massive expansion in globalization.

While we are starting to see some signs of this trend reversing, the lesson we’ve learned over the past two decades is clear…

All businesses now compete on a global level.

Gone are the days of feel good saying like “small is beautiful” or “there’s riches in niches.”

Yes, there are still pockets of opportunity in smaller markets…

But look no further to companies like Amazon and Wal-Mart for examples of how Big Business has continued to destroy Small Business.

And even though we’ve had a rough 2022 so far… the biggest companies in the world have only gotten bigger.

Indeed, it seems the only optimal size is “bigger” – and the only way to continue to drive growth at scale is by acquisition.

As companies move from the Opening Stage (Stage 1) and through the Scale Stage (Stage 2), profitability decreases dramatically. In fact, it drops to it’s lowest point of the curve.

Why? The authors conclude:

“Many companies respond to the increased competition with severe cost-cutting measures, but there is an embedded danger in this approach: It often drives companies into a profitability trap that does not allow for future growth.

As you might imagine, being stuck in this “profitability trap” can be a death sentence.

For CEO’s this means moving through Stage 2 and into Stage 3 – as quickly as possible – is key to improving profit margins and gaining a favorable Engame position.

In Stage 3: Focus, we start to see the beginnings of an oligopolistic market dominated by a few large players.

And by Stage 4: Balance and Alliance, the remaining titans typically reach their highest profit margins after laying waste to their competition.

For these reasons, the authors conclude:

“Speed is everything: Companies that move up the Endgames curve the fastest are [typically] the most successful. They capture critical ground early on and are destined to be first in the consolidation race.

In otherwords, there is [effectively] no niche that serves as a consolation prize.”

This means fundamentally that all short-term focused growth tactics become ineffective or obsolete in the Endgames landscape, and…

To successfully navigate this Endgame curve, companies needs to have a long-term plan for finding, buying, and integrating target companies.

Why? Because according to the authors research, organic growth by itself does not have enough force to propel a company up the Endgames curve at the necessary speed.

In the beginning, organic growth is vital to the success or failure of the company. However, in order to continue growing, it must acquire.

This means the sooner management masters acquisitions, the better their outlook is for long-term strategic success…

And for shareholders, the better their outlook is for potential returns.

But to bring us back to the point of this article…

What happens if one of your investments gets acquired?

As shareholders, it’s reasonable for us to expect that management will do what’s in the best interest of the investors…

And at some point, investors will get impatient and demand an exit.

As Pre-IPO investors, our preference is to see the company go public… and ideally succeed in the public markets long term.

But if you’ve been paying attention to the whole “Elon Musk buys Twitter” saga, just because the company is public doesn’t mean it’s doing a great job of building shareholder value.

If a serious buyer comes along and makes an offer, the management team usually has a fiduciary duty to take the offer to the board of directors and put it to a vote.

In a public company, there are two types of acquisitions:

As well as the options that you – a small, minority shareholder – have in these situations.

Before making any investment, the first thing you’ll want to do is review the Offering Circular (i.e. Form C or Form 1-A) and the subscription agreement.

These documents are the “legally binding truth” that govern the shareholders’ rights, obligations and liabilities.

In our experience, the majority of Reg-CF and Reg-A+ offerings do not include voting rights.

Or if they do, those rights have typically been assigned (by proxy) to the CEO or a “lead investor.”

This means in the event of an acquisition offer, you – the shareholder – will have absolutely no say on whether management should accept an offer or not.

But even if you did, there are still other common provisions – like pre-emptive rights, drag along and tag along, – you need to be aware of.

The basic idea is to ensure that the existing shareholders cannot be forced to accept an unwanted new shareholder.

And to do so at a price that is not lower than the price offered to any potential third party buyer.

This means if the management decides to sell, you have the right to sell your shares – to the same buyer – at the same price.

On the flip side…

This means that if management decides to sell, they can force you to sell your shares – to the same buyer – at the same price… even if you don’t want to.

Sometimes drag along provisions will be combined with a pre-emptive rights clause; this gives minority shareholders the right to buy the entire venture rather than being forced to work with a new third party buyer.

Regardless of exactly how the transaction goes down, you – the shareholder – will likely be required to sign a Share Purchase Agreement in order to sell your shares and get paid.

The offer could be an all cash offer; this means you simply sign on the dotted line and you get a check mailed to your address or wired to your account.

It could be an all stock offer; this means you would be given shares in the acquiring company valued at the purchase price.

It could also be a combination of the two. Or you might have the option to take either all cash or all stock.

There’s a variety of different ways this can play out, but the important thing to know is this; in the event one of your investments is sold to an acquirer, you will likely need to sign some paperwork to receive your compensation (if any).

Please keep in mind that investing in early stage companies should be considered high risk and speculative in nature.

Even if a company successfully sells to an acquirer, this doesn’t guarantee you will make a positive return…

Or for that matter, any return at all!

P.S. Have questions about Pre-IPO investing?

We’ve answered some of the most common questions our readers have submitted like:

The Best Time to Sell Your Pre-IPO Shares

How to Track the Value of Your Pre-IPO Portfolio

How to Invest on Equifund With Your Retirement Accounts

How to Deposit Your Pre-IPO Shares 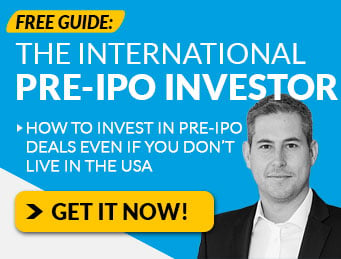